Happy Monday, everybody!! It’s been a cold one around here, but the sun is out which is more than I can say for the weather over the weekend so I’ll take it! I had a low key, relaxing Mother’s Day yesterday. It all started with breakfast in bed courtesy of my kidlets. DD prepared me a bowl of oats. I know there was cranberries, raspberries, strawberries and blackberries in it and I’m told there was also a little sugar (like, a ½ a tsp, Mom) and “some” honey. DS served up a bowl of the same fruit, still frozen. LOL! And a cup of (very strong) tea. 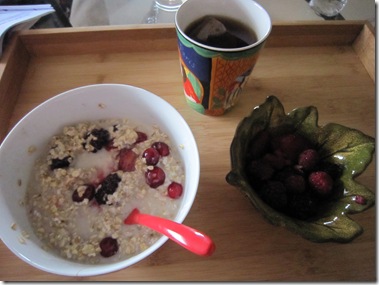 Such dolls! After that bowl of oatmeal I was pretty full so the berries thawed on the counter until lunch time.

We took a drive out to the farm and I finally got to play with the 2 babies!! I snapped a bunch of photos so here are a few. The reddish horse is Cinder Ella and the silvery on is Flec, short for reflection because she looks like her Dad. 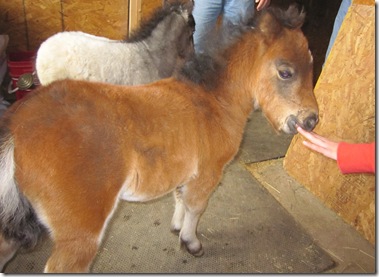 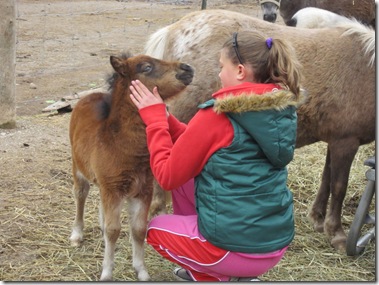 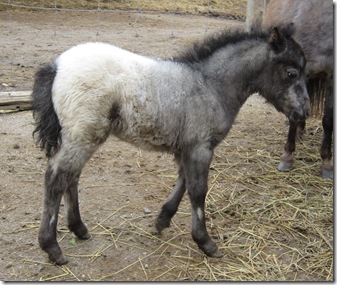 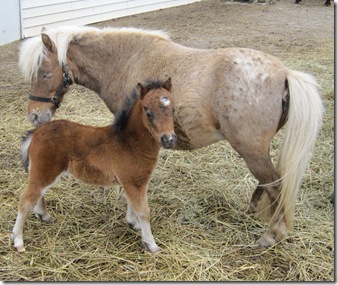 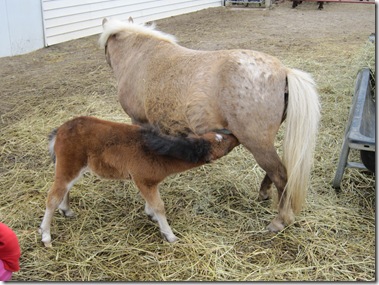 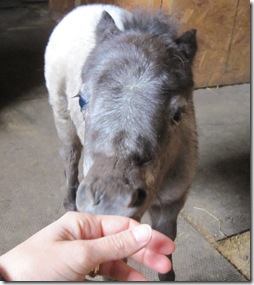 They’re teething which is why you see them nibbling on our hands. At this point they’re about the size of a golden retriever and just as friendly. Last years babies were a lot more skittish, whereas these 2 love to be handled. Once back from the barn and washed up, I enjoyed an apple Fritter straight from the Farmer’s Market: 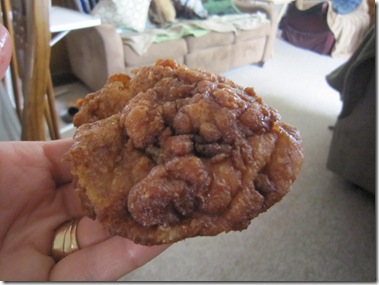 Haven’t had one of these in ages and it was scrumptious for sure. Lunch was on the light side because we were dining at my parents place for dinner and they eat ridiculously early….like 4:30pm. So around 1ish I ate my now thawed berries with some kefir and Nature’s Path PB granola. There was also a kind bars on the side. 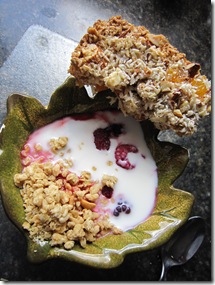 I brought some of the bars to my parents place my Mom and sis loved them.

My Mom mentioned in passing last week that she really liked calla lilies and hydrangeas so I set out to find her a plant for Mother’s Day. I found the MOST gorgeous calla lily! It’s my favourite colour in the whole wide world and I knew she would love it. 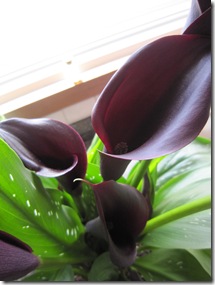 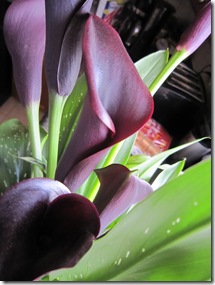 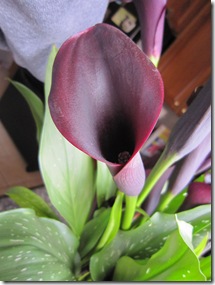 Isn’t that one of the most beautiful plants you’ve ever seen??? Love. My kids quickly made friends with a random cat that was wandering around the nursery: 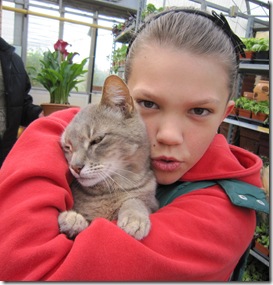 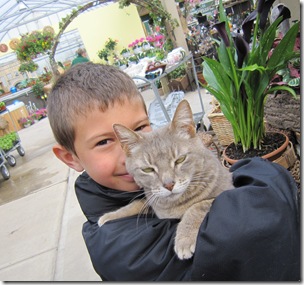 They’re like their Mom when it comes to animals!

We all enjoyed a great feast for dinner. There was a good variety of food. Here’s my plate loaded with ½ a sausage, sweet potato fries, bean salad, asparagus and artichoke hearts. I also ate an unpictured (small) piece of steak. 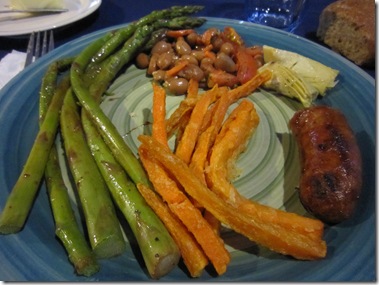 Mom also made her signature Drumstick cheesecake as it’s my brother’s b-day today and that was his requested cake.
Here is my monster piece. 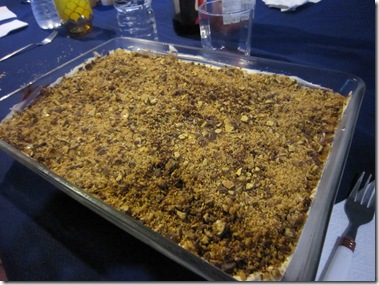 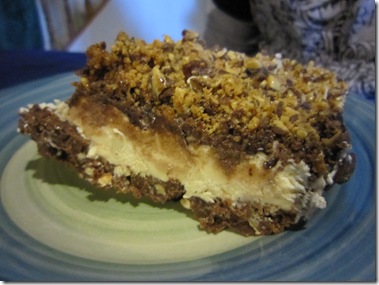 I tend to go a bit overboard when this is around because she only makes it once, maybe twice a year. After dinner we all pulled up a piece of couch and vegged out. HA! I did more of that when I arrived home under the guise of watching The Amazing Race. So sad the cowboys didn’t win. Boo!!

After a pretty good sleep I woke up fresh and ready to start a new week. A delicious, non oatmeal breakfast sealed the deal. 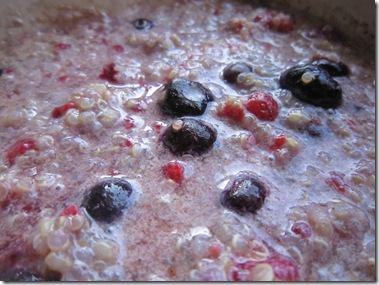 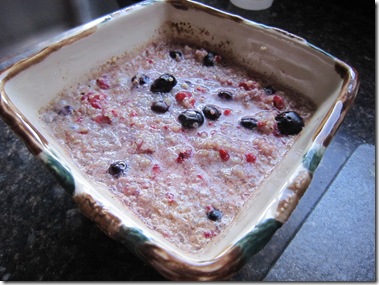 I just tossed this in the microwave for 3 minutes, checking it on and off to make sure nothing bubbled over. This breakfast held me over quite well until my late 1:30 lunch. I did enjoy a wee snack in the morning. One of my co workers left me a piece of homemade rhubarb cake on my desk: 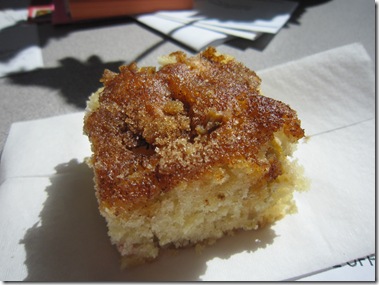 I really liked the cinnamon topping! Speaking of rhubarb; look at what I brought home from the farm yesterday! 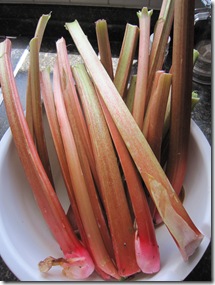 My MIL and DD went out into the cold weather to harvest a box for me. Aren’t they awesome?! I split it with my Mom. After I post this I’ll be washing, chopping and stewing this. Can’t wait!

Its yoga Monday so no gym for me. Instead, I went home, harassed my cats some, made a chai tea latte and read a few chapters of Foods Matters by Mark Bitton. 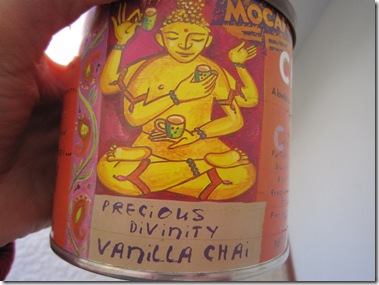 I found this at the library Saturday morning and snatched it up. The only thing is that I have to be careful reading these types of books because they really have an effect on me. If I were on my own I wouldn’t buy half the food that I do, but it’s difficult to completely follow “my way” of eating and thinking considering my hubby is not on the same page as I am. Just as he can not force me to eat strictly meat and carbs, I can not force him to give up those same foods. Such is life. Moving on…..back at work I ate half a WW pita stuffed with a LC cheese wedge, salmon and romaine lettuce. 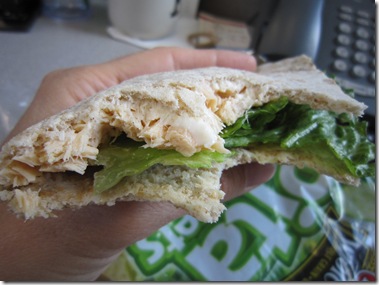 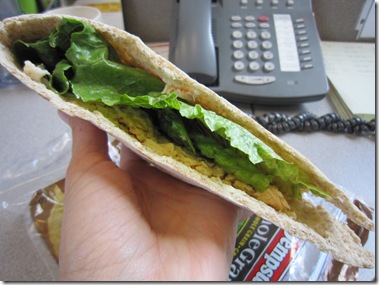 Kinda hard to take a good pic of a pita! HA! I ate a few chocolate soccer balls throughout the afternoon. 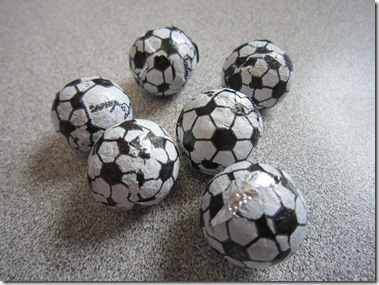 And yes, I am 110% guilty of pilfering these from DS’s loot bag from a party he went to on Saturday! ;)

Dinner tonight was grilled turkey sausage, asparagus and WW couscous with some Japanese dressing on top. 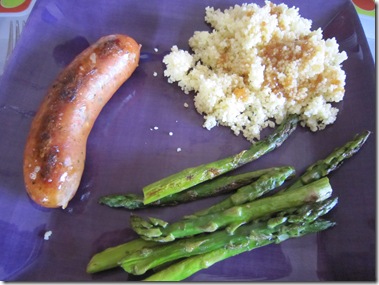 Then I ate a kind bars: 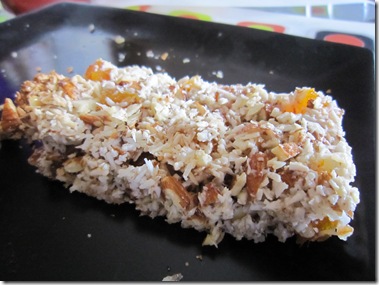 Probably a little much for a sweet end, but SO good!

Well, I’m off to pick DD up at dance and then I’ll be moving on to that rhubarb. Any fun plans for the week?

I'd love to hear from you!! Please leave a comment! 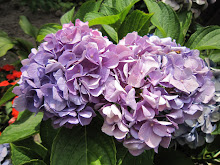